Number 300: Jeffrey Harrison "The Angel On The Table" 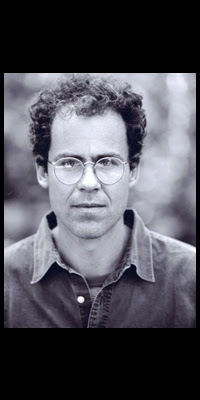 The Angel On The Table

She's losing her memory, isn't sure
who I am, is bothered by small things
like where that angel made from doilies
came from, the one she made herself
in the home's craft class. I remind her, but she
forgets again and in a minute asks again,
as if she's just noticed it for the first time.

The body is a doily twisted into a cone.
A doily cut and folded forms the wings.
The head is a Styrofoam ball, the hair a tuft
of cotton, the halo a gold pipe cleaner.
As simple and innocent as something
a child would bring home from school,
and in fact my daughter made one like it.

But this angel is a small torment to her,
perched on the table beside the photographs
of people she no longer recognizes–
but that doesn't bother her. It's the angel
she eyes with suspicion, even fear.
Where did it come from, what is it doing there,
what on earth does it want from her?

Hap Notes: Harrison was born in Cincinnati, Ohio and studied under one of our favorite poets, Kenneth Koch (who was also from Cincinnati, by the way.) He is an award winning poet– okay, I'll name some– a couple of Pushcart Prizes, a Guggenheim and an NEA fellowship, and the Amy Lowell Traveling Fellowship.

He has published, to date, six poetry collections and his poems have appeared in a variety of periodicals including The Paris Review, The New Yorker, Poetry and The New Republic. His teaching gigs include George Washington University, Phillips Academy and College of the Holy Cross.

This poem comes from his book Incomplete Knowledge (Four Way Books, 2006.) Much of the focus of the collection is on illness, grief and loss. The poems dealing with his older brother's suicide are particularly moving.

In today's poem, we see a woman, possibly a grandma since she lives in a "home" where they have craft projects. Think of the strange, suspicious terror and disconcerting confusion that results from suffering from Alzheimer's as this woman obviously does. Why do you think an angel could be particularly frightening, even a crudely made craft-project one? Can you feel how terrifying this could be? And as an observer of this, let alone a relative of the sufferer, wouldn't this be, at the very least heart-rending and painful?

There is something else here, though. Why would "small things" be particularly bothersome to this woman? Why do the pictures of unrecognized relatives and friends bother her less than the angel?

Here's a good Harrison quote: "I believe that a poet must write what comes naturally, but I also believe (and this may seem contradictory) that there is a necessary restlessness to being a poet, and if a poet doesn’t have this quality, then he or she is destined to be reincarnated over and over in the same poem. One doesn’t consciously change the way one writes, it happens naturally over time, but the restlessness helps move the process along."

You can find more of Harrison's poetry as well as interviews and essays here: home.comcast.net/~jeffrey.harrison/

(The masthead picture features a shot of the notorious "Black Angel" at Oakland Cemetery in Iowa City, IA. It was one of the legendary places of my youth and I've always thought the angel was equally comforting, mysterious and terrifying.)
Posted by Unknown at 8:23 AM