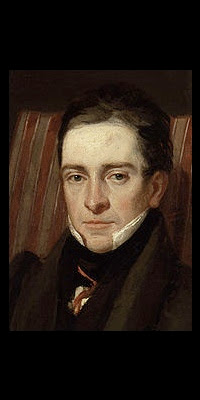 No sun--no moon!
No morn--no noon!
No dawn--no dusk--no proper time of day--
No sky--no earthly view--
No distance looking blue--
No road--no street--no "t'other side this way"--
No end to any Row--
No indications where the Crescents go--
No top to any steeple--
No recognitions of familiar people--
No courtesies for showing 'em--
No knowing 'em!
No traveling at all--no locomotion--
No inkling of the way--no notion--
"No go" by land or ocean--
No mail--no post--
No news from any foreign coast--
No Park, no Ring, no afternoon gentility--
No company--no nobility--
No warmth, no cheerfulness, no healthful ease,
No comfortable feel in any member--
No shade, no shine, no butterflies, no bees,
No fruits, no flowers, no leaves, no birds--
November!

Hap Notes: One can't help liking Thomas Hood (1799-1845) even though (or maybe because) he littered his work with puns and odd rhymes. During my column writing days I mentioned to a friend who was on the staff of the American Scholar (I was not) that I was sort of a "humorist" and he told me one should never limit the arrows in one's quiver by such a narrow description. This is what actually happened to Hood. Known as a humorist, he could never shake the description consequently his poetry never got the serious scrutiny of his contemporaries. (Although, let's face it; his contemporaries were pretty extraordinary writers whose work would overshadow all but the very best poets: Keats, Hunt, Coleridge, Tennyson, de Quincy, Lamb, Shelley, Thackeray and Clare just to name a few.)

He was born in London. His dad was a bookseller. Hood had some education and was the favored student of a private tutor. He worked in a counting house (Hap- what the hell is a counting house? Well, it's pretty much an accountant's office.), he didn't care much for that and he started to learn engraving but found he was not suited to the work. He suffered from ill health and was, throughout his life, afflicted with wearying weakness. (Side note; Everybody, almost to a man, suffered from ill health in England at this time- one supposes it was a combination of breeding, weather, water quality, sanitation practices, food standards and the burgeoning industrial revolution but, it's just an educated guess.) In fact, his health was so bad he moved to an aunt's home in Scotland where he took walks, ate healthy food and got healthy. He started writing poetry there.

He submitted articles and poems to small local papers in the area and eventually felt well enough to go back to England and re-start his engraving work. Hood was a good and clever illustrator but, again, he lived in a time of extraordinary illustrators; John Leech, George Cruikshank and William Harvey. Hood became the editor of the London Magazine and eventually started his own humor magazine, Hood's, and was a contributor to the quintessential British humor/current events magazine, Punch. It was in Punch where Hood's "Song of the Shirt" appeared, anonymously. The poem is a moving tribute to the poor working class and the poem was a smash hit (if such a thing can be said of a poem.) It was re-printed dozens of times on prints, as a pamphlet and even on handkerchiefs. Here it is, if you'd like to read it (and it's well worth your time): www.victorianweb.org/authors/hood/shirt.html .

Hood's work has its high points and its low points. In "Bridge of Sighs" he laments the drowning suicide of a young woman but one is never clear if it is supposed to be taken seriously with stanzas like this: "Still, for all slips of hers,/One of Eve's family—/Wipe those poor lips of hers/Oozing so clammily." Yeesh.

Then, too, as a famous punster, his poem "Faithless Sally Brown" is full of jokes and puns which were popular at the time but are sometimes somewhat lost on our era. The best of these, I think, is the final verse, spelling out the end of a sailing man who loved Sally, and reads: "His death, which happen'd in his berth,/At forty-odd befell:/They went and told the sexton, and/The sexton toll'd the bell." Get the jokes/puns, here? (death birth, told tolled. You get it.)

He had a few books published, often with other writers as with his book "Whimsicalities" – the masthead pictures show some of this book. He loved jokes, puns and saw the humor in most all situations. Wrote some fine poetry. Died fairly young–at 46. He was warmly remembered by his friends, which seems to me to be the mark of a fine human.

I suppose today's poem needs little extra explication. November in London, especially during his era, was a drab and cold and dark time. (Just a reminder that this weekend is the time change for us as well- which always makes November seem like the bringer of darkness, doesn't it?)

Here's a good quote from Hood: Hood defended his use of the puns with a couplet: "However critics may take offence,/ A double meaning has double sense."