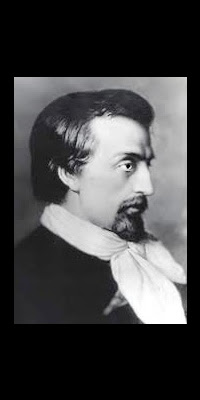 Death and His Brother Sleep (Morphine)

There’s a mirror likeness between those two
shining, youthfully-fledged figures, though
one seems paler than the other and more austere,
I might even say more perfect, more distinguished,
than he, who would take me confidingly in his arms –
how soft then and loving his smile, how blessed his glance!
Then, it might well have been that his wreath
of white poppies gently touched my forehead, at times,
and drove the pain from my mind with its strange scent.
But that is transient. I can only, now, be well,
when the other one, so serious and pale,
the older brother, lowers his dark torch. –
Sleep is so good, Death is better, yet
surely never to have been born is best

Hap Notes: This cheerful little poem is characteristic of Heinrich Heine's ( 1797-1856) depressing wit. Heine was a brilliant thinker who presaged the fate of Germany nearly 100 years before the zenith of the Nazi party. He was a prolific poet, journalist, critic and essayist and, in the course of his life, he knew many of the intellectuals, artists and writers who shaped his era. Much of Heine's work is punctuated by a sharp, ironic pessimism which sometimes is expressed with ironic humor and sometimes is just plain frustrated by human nature.

Heine was born in Dusseldorf, Rhineland, during the French occupation under Napoleon and Heine was a fan of Napoleon's expressed ideals in the Napoleonic Code; liberty, justice and equality. Heine was born a Jew but converted to protestantism because he wanted a teaching post and Jews were overlooked for such a position. In fact, his Jewishness stood in the way of his entrance to European culture. However, his conversion did not help him procure a position. In his university days Heine attended lectures by Franz Bopp, F.A. Wolf and the influential Idealist philosopher Georg Wilhelm Friedrich Hegel.

After studying at a variety of universities and writing some poetry and travel essays, Heine went to Paris, in part to escape German censorship laws. Heine had always been an outsider- one can feel this in much of his work. When he got to Paris he was as close to being happy as a thoughtful gloomy German could be. We often use the phrase "fish out of water" to express being out of one's element. The original expression started as "happy as a fish in water" and Heine said that the expression, when one fish would inquire about the other would have to be answered, "I feel like Heine in Paris."

Heine wrote essays, poetry and music criticism. It was he who termed the phrase "Lisztomania" in reference to the fainting and hysteria that followed Franz Liszt where ever he went. ( Sidenote: This was long before the milder, but every bit as wacky, Beatlemania of the 60s. Do you remember the Ken Russel film about Liszt, "Lisztomania"? With Roger Daltrey from the Who as Liszt, soundtrack by Rick Wakeman and Ringo Starr playing the Pope? It's a very odd film.) Heine was friends with Karl Marx (with whom he did not totally agree) and knew Liszt and Georges Sand (of whom he said was the least witty French woman he had ever met.)

Heine wrote an influential history of Germany, The History of Religion and Philosophy in Germany, in which he pretty much nailed the German political outlook that would grow over the following hundred years. He was a thinking philosopher-poet, not a political pundit, and he saw the writing on the wall more clearly than most. It will not surprise, then, that this book and many others authored by him were burned by the Third Reich. Heine himself wrote, in the 1800s, " ...where they burn books, they will ultimately burn people also." Chillingly accurate.

Many of Heine's poems were put to music by composers including Schumann, Strauss, Tchaikovsky and Mendelssohn just to name a handful. Here is Silcher's famous compostion for Heine's "Die Lorelei" (which all good students of German can sing)- this one is sung by the incomparable Richard Tauber: www.youtube.com/watch?v=UJweIV8OqT8&feature=related

In today's poem, Heine is talking about Thanatos and Hypnos, the twin brothers, in Greek mythology, of death and sleep. Hypnos and Thanatos are the sons of Nyx (Night) and Darkness (Erebos) and are often linked together. The poppies are their symbol from the flower's hypnotic reputation (and its opiate pharmacology.) Heine did not take morphine that I know of- this is strictly a poetic reference. Hypnos is often portrayed with wings around his face, Thanatos is depicted with dark wings and carrying an inverted torch (the extinguishment of life.) The last line sums up Heine's bitter sense of humor.

Heine was very ill the last eight years of his life. In 1997 a hair of the poet was analyzed and it was found he was suffering from chronic lead poisoning. He took to his bed for those last years and called it his Matratzengruft (mattress-coffin.) Friedrich Nietzche said of him, "“The highest conception of the lyric poet was given to me by Heinrich Heine. I seek in vain in all the realms of millenia for an equally sweet and passionate music. He possessed that divine malice without which I cannot imagine perfection… And how he employs German! It will one day be said that Heine and I have been by far the first artists of the German language.”

Here's a good Heine quote: "Christ rode on an ass, but now asses ride on Christ."

"When words leave off, music begins."

"It is extremely difficult for a Jew to be converted, for how can he bring himself to believe in the divinity of - another Jew?"

(The masthead is Evelyn Pickering De Morgan's Night and Sleep)
Posted by Unknown at 11:41 AM