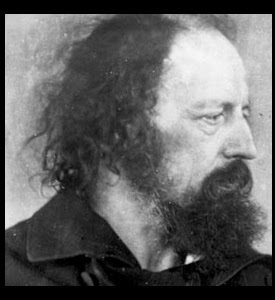 Tears, idle tears, I know not what they mean,
Tears from the depth of some divine despair
Rise in the heart, and gather to the eyes,
In looking on the happy Autumn-fields,
And thinking of the days that are no more.

Fresh as the first beam glittering on a sail,
That brings our friends up from the underworld,
Sad as the last which reddens over one
That sinks with all we love below the verge;
So sad, so fresh, the days that are no more.

Ah, sad and strange as in dark summer dawns
The earliest pipe of half-awakened birds
To dying ears, when unto dying eyes
The casement slowly grows a glimmering square;
So sad, so strange, the days that are no more.

Dear as remembered kisses after death,
And sweet as those by hopeless fancy feigned
On lips that are for others; deep as love,
Deep as first love, and wild with all regret;
O Death in Life, the days that are no more.

Hap Notes: Tennyson said he wrote this poem while visiting Tintern Abbey, a place which draws the poetry out of many writers. One of the most famous poems written about the place is Wordworth's "Lines Written A Few Miles Above Tintern Abbey." (The masthead pic today is a photo of part of the abbey.) So what is Tintern Abbey that it inspires so much versifying rumination? One supposes part of the appeal is that it was built in 1131 and was abandoned in 1536, so the ruins are haunted by hundreds of years of human history. When both poets visited the site it was more than likely festooned with ivy and vines, adding to its lonely beauty.

Tennyson said that he wrote the poem as he felt the memories of a bygone era around the abbey and that the poem was about "the passion of the past, the abiding in the transient." In the first stanza Tennyson makes it clear that there is a contrast between the "happy autumn fields" and the feelings that are arising within him. He is vividly recalling things from the past that move him as he looks on the current scene. How can the past feel so real in the present? And how can it be so real and yet so unreachable- one can remember so acutely and yet, it is as ephemeral as smoke.

Why do you think Tennyson calls these tears idle? Have you ever teared up thinking about a happy memory of the past? Why do we do this?

There is an amusing and famous story about this poem in the Oxford Book of Literary Anecdotes. It seems that Tennyson was on a boating trip with some friends and in the course of a conversation about tobacco (which he loved) he mentioned that the first pipe he smoked in the morning was the best one of the day. To which Sir William Harcourt, traveling with the party, quipped, "Ah, the earliest pipe of half-awakened bards." Tennyson was not amused. (He loved this poem and had no sense of humor about it.)

Tennyson's fame put him under a great deal of scrutiny and he was eccentric in dress (with a big cape and a sombrero or beret) and tousled locks. In 1855 he was at the Oxford Theatre receiving an honorary D.C.L. (Doctor of Civil/Canon Law- it doesn't make him a barrister, it's a high honor reserved for heads of state and writers of exceptional distinction.) A voice called out from the gallery, observing his blowzy hair style (see inset pic) "Did your mother call you early, dear?"

Tennyson has always been one of my favorites and, in spite of some sentimental stuff that can embarrass one, he has also, I believe, written some of the finest poetry ever penned in the English language.

Here's where we have talked about Tennyson before: happopoemouse.blogspot.com/2011/02/number-73-alfred-lord-tennyson-eagle.html

and here: happopoemouse.blogspot.com/2011/09/number-265-alfred-lord-tennyson-break.html
Posted by Unknown at 10:10 PM