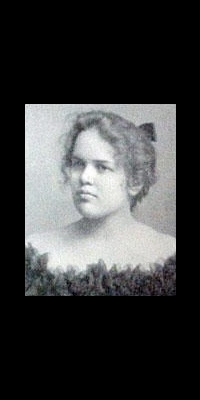 Listen...
With faint dry sound,
Like steps of passing ghosts,
The leaves, frost-crisp'd, break from the trees
And fall.

Hap Notes: Adelaide Crapsey (1878-1914) invented the cinequain, the form of poem featured today. The cinequain has five lines (hence its name) with a differing syllable count for each line. The first line has two, the second has four, the third has six, the fourth has eight and the last goes back to two again. She developed the poem based on her knowledge of Japanese haiku and tanka. She always titled the poems which gives the verse an extra line.

You may be familiar (most everyone who attended grade school in the U.S. within the last 30 years is) with the didactic cinequain, which is the fancy name for the poem your teacher made you write in the third grade. It follows the following order: the first line is a one-word title, the subject of the poem; the second line is two adjectives describing that title; the third line is a three word phrase about the subject; the fourth line is four words about the writer's feelings related to that subject; and the fifth line is a single word synonym or a repetition of line one. It is based on word count rather than syllables. (i.e. "Snowflakes/Icy white/Light as feathers/Dancing through my heart/Snowflakes".) Remember?

Crapsey was born in Rochester, New York, went to prep school in Kenosha, Wisconsin and then went to Vassar where she was a whiz, both the class poet and editor of the Vassarian. Her family life was fraught with difficulties. She was from a family of eight children and one of her brothers and one of her sisters died young. Her father was an Episcopal priest who gave a lecture stressing the humanity of Jesus and was subsequently tried for heresy and expelled from the ministry. It is said that he was tried as an exemplar to discourage other free thinkers and reformers from polluting the church. Adelaide attended the trials with her father.

She, also, had poor heath and died of tuberculosis when she was only 36. A slim volume of her poetry, Verses, was published after her death. She also wrote a book, A Study in English Metrics, in which she analyzed and attempted to classify poets based on their use of syllables as a consequence of their particular styles. She taught at both her alma mater prep school and at Smith College.

Carl Sandburg was responsible for much of the continued interest in Crapsey's work and the cinequain. Here is a bonus poem since I dropped the ball yesterday (I'm doing Nanowrimo this year: www.nanowrimo.org/ – it's good practice to try to write 50,000 words in a month. Not a good excuse but it's the only one I have.)

AMONG the bumble-bees in red-top hay, a freckled field of brown-eyed Susans dripping yellow leaves in July,
I read your heart in a book.

And your mouth of blue pansy—I know somewhere I have seen it rain-shattered.

And I have seen a woman with her head flung between her naked knees, and her head held there listening to the sea, the great naked sea shouldering a load of salt.

And the blue pansy mouth sang to the sea:
Mother of God, I’m so little a thing,
Let me sing longer,
Only a little longer.

And the sea shouldered its salt in long gray combers hauling new shapes on the beach sand.

(And, yeah, it's a tough name to shoulder for anyone, let alone a poet.)
Posted by Unknown at 1:21 PM