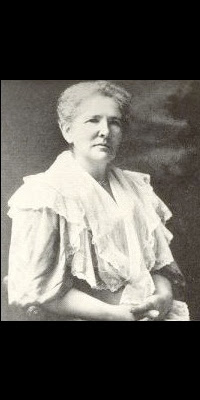 Hap Notes: This poem always made my mom giggle. It is included in most children's poetry anthologies and it still makes kids chuckle. Of course, there is no cord on contemporary phones in which to get tangled. The "telephunk" sounds, however, like a great description of text messages.

Laura Elizabeth Richards (1850-1953) wrote more than 90 books which include children's books , biographies and poetry. She, with co-author Maude Howe Eliot, won the first Pulizter Prize awarded for a biography, The Life of Julia Ward Howe. It's certainly an honor but not a particularly surprising one since she and her co-author were sisters and the daughters of Julia Ward Howe. Their mom wrote the lyrics to "The Battle Hymn of the Republic." Their parents were noted abolitionists. Their dad started the Perkins Institution and Massachusetts School for the Blind. Quite a pedigree.

You may remember her book, Captain January, later made into a movie starring Shirley Temple. Her sequel to that book is Star Bright, which you also may remember. She wrote the "Hildegarde" series, the "Melody" series and the "Margaret" series, too. You can find many of her works for free reading here: www.gutenberg.org/browse/authors/r#a1753.

It's Saturday! Yay! So here's some cartoons, commercials and songs.

First off, the controversial crows from "Dumbo". When I was a kid, I loved these crows and did not see how intensely racist they are. I thought they were the best part of the movie. I was both ignorant and innocent. (er, maybe "was" is optimistic...) Here's "When I see an Elephant Fly."
www.youtube.com/watch?v=E2d4bj592ig&feature=related


I wanted this cereal SO MUCH when I was a kid. My mom said it was too expensive. It had a storybook on the box about Twinkles the elephant: www.youtube.com/watch?v=79mp-TTkcVM

Then there was Crispy Critters with the awesome Sheldon Leonard doing the voice for King Leonardo. My brothers and sisters used to laugh hysterically at the rush of animals and sing the song:www.youtube.com/watch?v=nG949NeSDPk&feature=results_video&playnext=1&list=PLAD44F4DA10C54C55

Apropos of nothing- here's Senor Wences on the Ed Sullivan Show. I loved him. He is amazing and spawned a cultural catchphrase with that "S'alright?" "S'alright!" interchange. Did you know the reason that the character is in a box is because his ventriloquist "dummy" broke when he was on his way to a performance? : www.youtube.com/watch?v=uEio4rQDU5A


Here is the Elephant Orchestra- it's amazing: www.youtube.com/watch?v=k1NpvHsxjgw