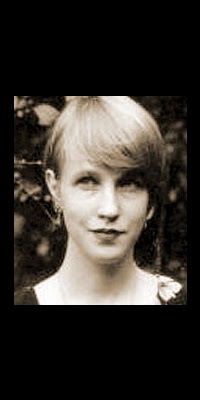 Fairy tales are full of impossible tasks:
Gather the chin hairs of a man-eating goat,
Or cross a sulphuric lake in a leaky boat,
Select the prince from a row of identical masks,
Tiptoe up to a dragon where it basks
And snatch its bone; count dust specks, mote by mote,
Or learn the phone directory by rote.
Always it’s impossible what someone asks—

You have to fight magic with magic. You have to believe
That you have something impossible up your sleeve,
The language of snakes, perhaps, an invisible cloak,
An army of ants at your beck, or a lethal joke,
The will to do whatever must be done:
Marry a monster. Hand over your firstborn son.

Hap Notes: Alicia Elsbeth Stallings (born 1968) was a classics major and studied at both the University of Georgia and at Oxford. She is described as being part of the contemporary "New Formalists" school of poets. However, I think it is wise to leave the naming of the so called "schools" of poetry to future generations but this "formalist" category will do for now. Formalists usually keep to a metrical style with somewhat traditional rhymes and patterns. (This is a general rule more than a specific one so sometimes these "school" names are somewhat useless, but let it pass for now, eh? I'm often sort of vexed that the word "new" enters into it. They're Formalists. Period. Just sayin'.)

She has written two books of poetry and has translated Lucretius. For such a small output of poetry she has won a plethora of prizes including the James Dickey award, the Pushcart Prize, and the Eunice Tietjens Prize. She lives with her journalist husband in Athens, Greece.

Today's poem starts out talking about the odd tasks the heroes/heroines of fairy tales are given to do in order to find happiness or a fortune or true love or break a spell etc. The poet amusingly adds a few things that would equal these tasks in today's word, like memorizing the phone book. Remember that Stallings is schooled in the classics so she makes a nod to Virgil's Aenied with the leaky boat that takes Aeneas to the underworld. Myths and fairy tales are often in place to teach us valuable lessons about life, are they not?

So there's the whimsy of fairy tales that makes us think that this poem is saying that with the "logic" of a fairy tale you must fight magic with more strange magic. But there is something far darker and more mysterious going on in this poem.

What would it really be like to marry a monster? Who could literally do that? What kind of person could give up a first born child? In fairy tales this happens, to be sure, but in reality what do we call a spouse who is an abusive monster? What sort of real world circumstances would lead a person to give up a child?

We are read fairy tales when we are young but we learn early in our adulthood that marrying a monster will break no evil spells and that giving up a child is painful and difficult. So what is the poet telling us about fairy tales and logic and life and will and magic?

Here's a great Stallings quote: " I always liked the fairy tales—the original, uncut versions, the ones with violent, horrible endings. I think the unexpurgated fairy tales are actually comforting to children. They are a lot more cathartic. I mean something happens to the bad people, and they get put away, so you feel safe when the story is over. I never remember having a nightmare because of a fairy tale, and I liked Hans Christian Anderson's tales. They often have sad endings. The Little Mermaid, for instance, has a very sad ending."

and another: "Form is just a tool, another way to get where you're going, and you should be able to use it any way you want to. Maybe I should feel more reverent about it, but poets in the past pretty much used form however they wanted to. Shelley's "Ozymandias" is a sonnet with a nonce rhyme scheme, so I feel pretty free to do whatever I want."

You can read the whole interview here: www.cortlandreview.com/issue/19/stallings19.html

You can find more Stallings' poetry and prose here: www.poetryfoundation.org/bio/ae-stallings