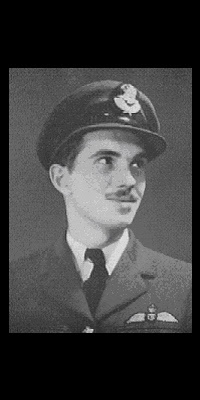 Oh! I have slipped the surly bonds of Earth
And danced the skies on laughter-silvered wings;
Sunward I’ve climbed, and joined the tumbling mirth
of sun-split clouds, — and done a hundred things
You have not dreamed of — wheeled and soared and swung
High in the sunlit silence. Hov’ring there,
I’ve chased the shouting wind along, and flung
My eager craft through footless halls of air....

Up, up the long, delirious, burning blue
I’ve topped the wind-swept heights with easy grace.
Where never lark, or even eagle flew —
And, while with silent lifting mind I have trod
The high untrespassed sanctity of space,
- Put out my hand, and touched the face of God.

Hap Notes: John Gillespie Magee, Jr. (1922-1941) was an American flyer who joined up with the Royal Canadian Air Force before the U.S. entered WWII. He was killed at 19 in a collision, an accident over Lincolnshire, England involving his plane and a trainer plane.

Magee wrote poetry all through his high school years (and won prizes for it) and was influenced by the soldier poetry of Rupert Brooke.

I include it for several reasons. First off, its lines are memorable and Magee's description of flight is possibly unsurpassed. Second, it is an amazing work for an 18 year old, and would be for a poet far older. Third, while the last line is strictly metaphoric, it certainly makes one feel the wonder and splendor of soaring through the sky. Fourth, anyone over 40 will probably remember it. Why? Well, because many television stations, back when the broadcast day was rarely longer than 18 hours, signed on or off using this poem.

At one or two in the morning, a film clip of airplanes (sometimes fighter planes or jets) would be shown with a narrator reading the poem. A flag waving in the wind was usually the last shot, then the television would go to what we used to call "snow" or static.

Some stations played footage of a waving flag while ""The Star Spangled Banner" played in the background before "signing off" for the day. Some stations opened their broadcast day with the "banner" and closed with "High Flight" or vice versa. But if you were a night owl or an early riser you would remember today's poem.

Here's one version of what this looked like: www.youtube.com/watch?v=EzQYd_INSOg
There are many more versions of this, of course.

While Magee was certainly a young poet, I don't know that a better description of gravity exists than the "surly bonds of earth."

Even folks who say they don't know or like poetry, often remember and dig this one.
Posted by Unknown at 12:38 PM