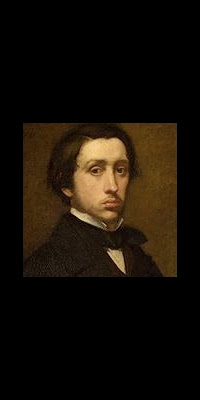 
He made a line on the blackboard,
one bold stroke from right to left
diagonally downward and stood back
to ask, looking as always at no one
in particular, "What have I done?"
From the back of the room Freddie
shouted, "You've broken a piece
of chalk." M. Degas did not smile.
"What have I done?" he repeated.
The most intellectual students
looked down to study their desks
except for Gertrude Bimmler, who raised
her hand before she spoke. "M. Degas,
you have created the hypotenuse
of an isosceles triangle." Degas mused.
Everyone knew that Gertrude could not
be incorrect. "It is possible,"
Louis Warshowsky added precisely,
"that you have begun to represent
the roof of a barn." I remember
that it was exactly twenty minutes
past eleven, and I thought at worst
this would go on another forty
minutes. It was early April,
the snow had all but melted on
the playgrounds, the elms and maples
bordering the cracked walks shivered
in the new winds, and I believed
that before I knew it I'd be
swaggering to the candy store
for a Milky Way. M. Degas
pursed his lips, and the room
stilled until the long hand
of the clock moved to twenty one
as though in complicity with Gertrude,
who added confidently, "You've begun
to separate the dark from the dark."
I looked back for help, but now
the trees bucked and quaked, and I
knew this could go on forever.

Hap Notes: I'm always flummoxed as to what to do on 9/11. It's a strange and haunting tragedy in U.S. political and cultural history. One wants to mourn the loss of life without getting too syrupy or maudlin or dragging the poor tattered flag into it. It is inarguable that those who perished in the Twin Towers perished because they were Americans. It's what America means to the world and to ourselves that stands at the crossroads of this incident. I prefer to think of Americans as being folks who, like Levine, lived through tough times and were yet still touched by art and poetry and literature. All of us are made of snow and once fully formed, proceed to melt into and through the years.

Levine's poem is a fantasy in which his junior high class is sitting in a class with M. Degas, "M." is the abbreviation for "Monsieur" and yes, he's talking about Edgar Degas (1834-1917) the painter. (and no, Degas did not really teach there.) What is going on in the poem? Well, I want you to think on why this poem could be appropriate for 9/11. It has to do with discovery, art, depth and life.

Here's the actual school (Durfee) with some comments on Levine and the school in general (a good read- it will help you discern things in the poem) :www.marygrove.edu/academics/undergraduate-academics/undergrad-programs/detroit-studies/757-durfee-middle-school.html

Here's where we've talked about Levine before- this also will help you with today's poem. happopoemouse.blogspot.com/2011/01/number-45-philip-levine-they-feed-they.html

The masthead is artwork by Degas, the inset on this page is a portrait of the artist.
Posted by Unknown at 10:18 AM