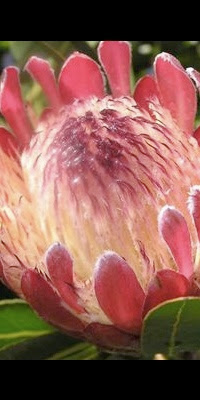 The strange and wonderful are too much with us.
The protea of the antipodes--a great,
globed, blazing honeybee of a bloom--
for sale in the supermarket! We are in
our decadence, we are not entitled.
What have we done to deserve
all the produce of the tropics--
this fiery trove, the largesse of it
heaped up like cannonballs, these pineapples, bossed
and crested, standing like troops at attention,
these tiers, these balconies of green, festoons
grown sumptuous with stoop labor?

The exotic is everywhere, it comes to us
before there is a yen or a need for it. The green-
grocers, uptown and down, are from South Korea.
Orchids, opulence by the pailful, just slightly
fatigued by the plane trip from Hawaii, are
disposed on the sidewalks; alstroemerias, freesias
fattened a bit in translation from overseas; gladioli
likewise estranged from their piercing ancestral crimson;
as well as, less altered from the original blue cornflower
of the roadsides and railway embankments of Europe, these
bachelor's buttons. But it isn't the railway embankments
their featherweight wheels of cobalt remind me of, it's

a row of them among prim colonnades of cosmos,
snapdragon, nasturtium, bloodsilk red poppies,
in my grandmother's garden: a prairie childhood,
the grassland shorn, overlaid with a grid,
unsealed, furrowed, harrowed and sown with immigrant grasses,
their massive corduroy, their wavering feltings embroidered
here and there by the scarlet shoulder patch of cannas
on a courthouse lawn, by a love knot, a cross stitch
of living matter, sown and tended by women,
nurturers everywhere of the strange and wonderful,
beneath whose hands what had been alien begins,
as it alters, to grow as though it were indigenous.

But at this remove what I think of as
strange and wonderful, strolling the side streets of Manhattan
on an April afternoon, seeing hybrid pear trees in blossom,
a tossing, vertiginous colonnade of foam, up above--
is the white petalfall, the warm snowdrift
of the indigenous wild plum of my childhood.
Nothing stays put. The world is a wheel.
All that we know, that we're
made of, is motion.

Hap Notes: As usual Clampitt is covering a lot of ground in this poem, poetically, botanically and geographically-both literally and figuratively (I read recently that one shouldn't use adverbs- a lot of illiterate hooey, if you ask me). Her amazing brain-full of information is both charming and staggering in its depth. Let's get right to the poem because it is loaded.

First off, Clampitt is telling us something with the first verse as she changes a line to a famous Wordsworth poem- here is Wordsworth, examine it carefully- it will come up over and over in her poem in different ways. :

The World Is Too Much With Us

The world is too much with us; late and soon,
Getting and spending, we lay waste our powers;
Little we see in Nature that is ours;
We have given our hearts away, a sordid boon!
This Sea that bares her bosom to the moon,
The winds that will be howling at all hours,
And are up-gathered now like sleeping flowers,
For this, for everything, we are out of tune;
It moves us not.--Great God! I'd rather be
A Pagan suckled in a creed outworn;
So might I, standing on this pleasant lea,
Have glimpses that would make me less forlorn;
Have sight of Proteus rising from the sea;
Or hear old Triton blow his wreathed horn.


So, let's go back to Clampitt's poem. Protea are any of a variety of plants with a wide variety of forms- one is pictured next to the poem- named for Proteus, one of the gods of the sea who could change into any form. Clampitt calls the bloom a "blazing honeybee of a bloom" and there is a story (from Virgil's Georgics) that says at one time Aristaeus, the son of Apollo (remember him?) kept bees and they all died of disease. It's a long story but to shorten it as much as possible, Aristaeus' mom told him to go to Proteus, hold him no matter what form he tried to change into, and ask him for help. He did it, Proteus gave him instructions and when he got back, he found a swarm of bees in one of his sacrifices to the gods and his bees never suffered from disease again. Antipodes, as Clampitt is using the word, is the word for any place on earth and its diametric opposite (remember when you were a kid and you thought if you dug straight into the ground you'd come out in China or somewhere? That is antipodal to your digging position- which, of course, I tried when I was a kid but got tired of digging- you keep hitting rock.)

Did Clampitt bury all this stuff in just the first few lines? You bet your boots she did. There's probably MORE that I'm not getting.

However, you don't need to know any of this to enjoy Clampitt's sumptuous, sensuous, gorgeous wording about flowers and plants and life. It's just an added feature when you know a bit more (and there is more but we'll stop now so you can take all this in and enjoy her poem.) Here's a question for you, though: Is she coming to the same conclusion as Wordsworth or does she have a different view?

Father Flye, by the way, was a well known priest in New York who knew a great deal about nature and had a correspondence with the writer James Agee, among other remarkable things about his life. He was an inspiration to hundreds of people in his long lifetime.

Clampitt, when she starts talking about flowers and plants throughout the country, likens it to sewing (another word for planting, sewing seeds, remember) and talks of the "corduroy" furrows and the " scarlet shoulder patch of cannas/on a courthouse lawn"- those red flowers seen at every small town courthouse (and note the building has a "shoulder"- those buildings do look as dignified as a fully uniformed person, don't they?)

There is so much more in this poem but I'll let you "dig" through it yourself. Have a good time with it- the poem will just keep growing and blooming as you appreciate it. (It wouldn't hurt any to read Wordsworth's "I Wandered Lonely As A Cloud," either- there are insights in it that parallel this poem a bit.)

Here's where we've talked about Clampitt before:
happopoemouse.blogspot.com/2010/12/number-16-amy-clampitt-smaller-orchid.html
Posted by Unknown at 4:26 PM