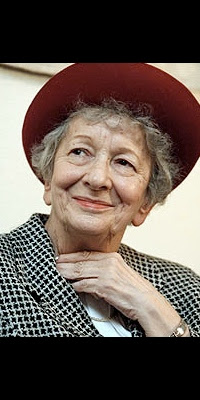 Some people--
that means not everyone.
Not even most of them, only a few.
Not counting school, where you have to,
and poets themselves,
you might end up with something like two per thousand

Like--
but then, you can like chicken noodle soup,
or compliments, or the color blue,
your old scarf,
your own way,
petting the dog.

Poetry--
but what is poetry anyway?
More than one rickety answer
has tumbled since that question first was raised.
But I just keep on not knowing, and I cling to that
like a redemptive handrail.

Hap Notes: Wislawa Symborska (born 1923) won the Nobel Prize for Literature in 1996. She is a wonderful poet and deserves a wide audience but just winning the Nobel Prize doesn't seem to do this as much as it should. It certainly asks the question: what the heck do you have to do to get recognized as a poet? Win the Nobel Prize? (Answer: Well, it couldn't hurt but don't count on that.)

She is well-loved, well-read and respected in her native Poland, though. She is not particularly a prolific poet, publishing only 250 poems in her lifetime, so far. As a young woman, Symborska had poetry published as she worked as an illustrator and other jobs (secretary, railroad worker). Originally supporting the "party line" she signed petitions in favor of Lenin and Stalin and like most intellectuals she became disenchanted with the cant and left the party and became more dissident in the 60s. She worked for a literary magazine, wrote a literary review column and edited a monthly periodical. She was encouraged in her writing early on by Nobel Prize-winning poet Czesław Miłosz.

She is said to be humble, shy and a bit retiring.

In today's poem, she both explains how some folks "like" poetry and others, like herself, use it as a "redemptive handrail." The handrail image makes a lot of sense to me. Poetry can steady a person as they go through life. Seeing the misery of others, seeing the wild beauty of the universe, poetry can be a stabilizing element that helps a person stand up when life is too dizzying with its strange and vertiginous variety, both the awful and the "awe"-full. That handrail helps you pull your way up and steady your way down.

You can find more Symborska here: info-poland.buffalo.edu/web/arts_culture/literature/poetry/szymborska/poems/link.shtml
Posted by Unknown at 10:10 AM