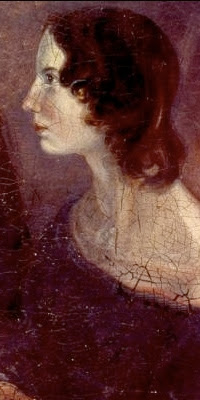 How Still, How Happy

How still, how happy! Those are words
That once would scarce agree together;
I loved the plashing of the surge -
The changing heaven the breezy weather,

More than smooth seas and cloudless skies
And solemn, soothing, softened airs
That in the forest woke no sighs
And from the green spray shook no tears.

How still, how happy! now I feel
Where silence dwells is sweeter far
Than laughing mirth's most joyous swell
However pure its raptures are.

Come, sit down on this sunny stone:
'Tis wintry light o'er flowerless moors -
But sit - for we are all alone
And clear expand heaven's breathless shores.

I could think in the withered grass
Spring's budding wreaths we might discern;
The violet's eye might shyly flash
And young leaves shoot among the fern.

It is but thought - full many a night
The snow shall clothe those hills afar
And storms shall add a drearier blight
And winds shall wage a wilder war,

Before the lark may herald in
Fresh foliage twined with blossoms fair
And summer days again begin
Their glory - haloed crown to wear.

Yet my heart loves December's smile
As much as July's golden beam;
Then let us sit and watch the while
The blue ice curdling on the stream.

Hap Notes: I'm always getting the Bronte sisters confused in my own head. Emily Bronte (1818-1848) is the one who wrote Wuthering Heights (wuthering is a Yorkshire word which refers to stormy weather). Charlotte wrote Jane Eyre and Anne wrote Agnes Grey and The Tenant of Wildfell Hall.

It has always amazed me that Charlotte is so highly respected and Anne is not. The Tenant of Wildfell Hall is an extraordinary book-- much more like a Thomas Hardy novel, say Jude the Obscure. Charlotte hated the book so much she refused a second printing after Anne was dead and the book had sold out. Sheesh! Where were we? Oh yes, Emily. Emily was most surely the poet of the trio and while her poetry was not met with much enthusiasm when it was published, it has increased in merit over the years.

I find Emily's poetry charming and graceful, unlike the characters in Wuthering Heights who are singularly selfish. Somebody somewhere must have done a study of what the Bronte sisters thought of men whom they portray as selfish drunken louts, milque-toasty toadies or saints. Mostly the former. I have enjoyed the books but on the whole, I'll take Jane Austen. Oh, wait, this isn't about me- sorry- started musing there. Let's go back to Emily.

I thought since this poem was actually written for the winter that the images would cool us down since the nation has been in such a heat wave. Just the phrase "blue ice curdling on the stream" makes one feel cooler, doesn't it? She brings up a good point, too, that one can imagine most every season no matter what the weather is, if one wants to. The imagination is a very powerful tool. The Bronte sisters and their brother, Branwell, created extensively detailed imaginary worlds as children and wrote lots of stories and poems about them.

The Bronte sisters wrote a book of poetry together with their pen names taken to make them seem to be men (because women were eschewed as writers, etc. etc....you know the drill.) Charlotte was Currer Bell, Emily was Ellis Bell and Anne was Acton Bell and the book was called Poems By Currer, Ellis and Acton Bell. The poetry was really mostly Emily's and she turned to novel writing to enact her vengeance at her poetic dismissal with a book bound to be made into countless cheesy movies and stand as an archetype as a "romantic hero." (Okay, she didn't do it quite like that. Heathcliff is a very bad romantic, let alone hero. And Emily didn't write from rage, or---maybe she did...)

If you are in any Women's Studies classes the Bronte sisters are sure to be mentioned. They were very gifted storytellers and keen observers of dialect and life. Their health was compromised by poor sanitary conditions (it was the water, not their housekeeping- which led to typhus. tuberculosis and pneumonia) and both Emily (at 30) and Anne (at 29) died young. Branwell Bronte, their only brother, was a portrait painter. He was said to be dashing and handsome and talented. He had a torrid affair with a married woman, was abandoned by her and became a severe alcoholic ( you gettin' the drift that the Bronte sisters saw some firsthand stuff to use for their characters, here?) He also died at 29.

So Charlotte was left to sort out the stories. She didn't live all that much longer, dying at age 38. But she, alone, escaped to tell.

The masthead picture is a portrait Branwell painted of himself and his three sisters. Don't see him in the painting? He painted himself out. There is an apocryphal story that the Bronte's father wiped him out of the painting with turpentine. The sisters in the painting are, left to right: Anne, Emily and Charlotte. The painting next to the poem is one Branwell did of Emily.

Here's some of Anne's work: www.readbookonline.net/books/Bronte/37/

And here's Charlotte: www.readbookonline.net/books/Bronte/24/
Posted by Unknown at 11:47 AM