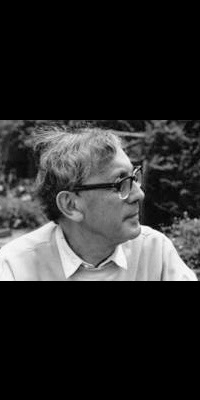 Green Man in The Garden

Green man in the garden
Staring from the tree,
Why do you look so long and hard
Through the pane at me?

Your eyes are dark as holly,
Of sycamore your horns,
Your bones are made of elder-branch,
Your teeth are made of thorns.

"Leave your house and leave your land
And throw away the key,
And never look behind," he creaked,
"And come and live with me."

But when I softly turned the stair
As I went up to bed,
I saw the green man standing there.
"Sleep well, my friend," he said.

Hap Notes: I was stunned to find out that Causley (1917-2003) has been chiefly known as a "children's" poet because I'd never even considered him as that. He's filled with childlike and charming observations but his poetry has strong adult shadows. His clear-eyed, plain speaking way of writing poetry has enchanted so many that he gets relegated to the "populist" side of poetry which means that academia often leaves him thumbing a ride on the side of the serious road and that's their loss. I'll point out that intellects more towering than my own like John Betjeman, Ted Hughes, Philip Larkin and Dan Gioia defended Causley's work.

Children often have a unique understanding of Causley that adults often fail to grasp. I suppose adults are looking for the sex, violence and grimy grit of urban life in modern poetry. Causley saw WWII, as a soldier and his father slowly died of complications due to poison gas in WWI so Causley had seen true sadness and tragedy. The kind of violence and grit he saw pales the angst of urban life and I don't think he had any need of using it. There is an innocence of spirit in his work which always makes one (okay, me) want to give him a cup of tea and a hug.

He was born in Cornwall (his voice has what they call a "Cornish burr'), had to work to help support his mom and served in WWII. His reaction to the war was to write poetry while he was serving which served as a lesson in writing with some condensed brevity. He was a schoolteacher for some 30 years in Launceton (the town in which he was born) and he cared for his mother who'd had a stroke. He never married (and no, he wasn't gay) and was a somewhat shy and private person who loved folklore (Celtic tales abound in Cornwall) and stories and taught himself much through his incessant reading.

He's won scads of awards, especially later in his life and is much beloved as a writer of the people. He wrote ballads and short poems that are easily understood but haunting. Ah, perfect segue to today's poem.

The Green Man is a mythic figure, often called Jack in the Green. He's associated with growth, the forest, the spring, the wilderness and hence, a wild and natural creature. You've probably seen depictions of him, and indeed, those depictions on churches, buildings and the like are called Green Man. Here is a wonderful and thorough explanation of him and you'll see his lovingness and dark mystery for yourself: /www.endicott-studio.com/gal/galgreen.html

Now, if you were reading this as a child (as I did) wouldn't you see the dark whimsy here? There's a scare in this poem, a sort of reverence, some magic and myth that delights the child who loves a story. Yet there's an adult shadow in all this. He's not the green boy, he's a green man. There's a complexity to this. What does the Green man want of us? Kids feel it, adults need to think on it. This poem is much deeper than it appears at first reading. (Unless you know the Green Man myths already – then you are nodding your head at that last line, knowingly.)

Here's a Saturday bonus poem of Causley's. It's got a sly humor to it.

I Saw a Jolly Hunter

I saw a jolly hunter
With a jolly gun
Walking in the country
In the jolly sun.

Here's a good Causley quote: "If I didn't write poetry, I think I'd explode."

"I was a great reader, even when I was tiny. I remember reading the newspaper aloud to my father at five and seeing how pleased he was. My mother would borrow grown-up books from the tuppenny library and I'd read them before she took them back. I became very familiar with what would now be called `women's novels'. One author was called Olive Higgins Prouty. She wrote a rather daring novel called Stella Dallas in which, I didn't realise until many years later, the main character was a whore. She seemed a rather nice lady."

And one of my (and many others') favorite cartoons of all time: www.youtube.com/watch?v=NRnX4quv5W4&feature=related
Posted by Unknown at 4:59 AM