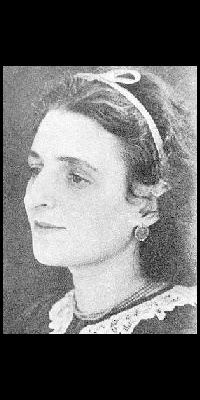 Across a continent imaginary
Because it cannot be discovered now
Upon this fully apprehended planet—
No more applicants considered,
Alas, alas—

Ran an animal unzoological,
Without a fate, without a fact,
Its private history intact
Against the travesty
Of an anatomy.

Not visible not invisible,
Removed by dayless night,
Did it ever fly its ground
Out of fancy into light,
Into space to replace
Its unwritable decease?

Ah, the minutes twinkle in and out
And in and out come and go
One by one, none by none,
What we know, what we don't know.

Hap Notes: I wish I could tell you with absolute certainty that in fifty years or so, Laura Riding's poetry and prose will be studied with as much assiduity as Eliot's or Stevens' or Pound's. But I cannot. I don't know where (as, indeed, few do) all of our poets will be in the constellation of "fame" as time goes by. But it would be a great pity if Riding's work is dismissed or forgotten because she is a revelation, was a muse and had a soaring spirit and lofty intelligence. If you are unfamiliar with her work, I am not surprised. We still take our "serious" poetic cues from male writers, with a few exceptions.

Laura Riding (1901-1991) was born Laura Reichenthal in New York. She went to Cornell, wrote poetry (she said her first real influence was Edwin Arlington Robinson) and got marginally attached to the "Fugitive" poets at Vanderbilt University through Allen Tate, who published her poems in "The Fugitive" literary magazine. Riding was married to historian Louis Gottschalk, an expert on Lafayette and the American Revolution. They met while he was a grad student and she was an undergrad at Cornell. When the marriage ended in divorce in 1925 Riding went to England at the invitation of Robert Graves and his wife.

Now we got trouble. Her poetry was highly lauded in England at the time. She and Graves got "involved" she attempted suicide, Graves left his wife and ran away to Spain with Riding and the whole thing was as sensational as a Madonna tryst with some other superstar as reported in People magazine. But wait, there's more.

Riding and Graves are productive, start up a press, have impressive visitors, go back to England, then back to Spain (I'm compressing here) and end up at the end of their relationship in the U.S. If you've ever read Miranda Seymour's novel, The Summer of '39, you've read a fictional account of what happened when Graves and Riding visited the Schuyler Jacksons which resulted in Jackson divorcing his wife (nervous breakdowns and madness abound). He then marries Riding. It's pretty dramatic stuff, all in all.

Riding was married to Jackson until his death in 1968, her life, as you can see, spanned the century. She completely renounced poetry in 1941, not because she did not love it or love the writing of it but because, I think, she was tired of having it analyzed, dismissed, vaunted or characterized. She was an intelligent and strange creature who had a very powerful personal magnetism.

Jackson, a writer for Time magazine, and Riding (who took his name on all her subsequent work as Laura Riding Jackson) worked for many years on a dictionary, Rational Meaning: A New Foundation for the Definition of Words, published posthumously in 1997. She continued to write and search for truth in words and meanings throughout her life.

Now, I cannot do justice to Riding in the small space here but I will say that it is a hotly contested literary argument that Graves got most of his ideas for "The White Goddess" from Riding. She is just not easily summed up and critics vary widely on her work and her influence. I would suggest reading her seminal work, The Telling, a prose expansion on her ideas about language and poetry. Also her essay "The Road To, In and Away From Poetry" is helpful.

Riding is a marvel of thought and strikes me as highly original for her time. She was often called a "witch" in her younger days and I think this might be right in the mystic sense of the word.

In today's poem, Riding is telling us something about the life of mankind on this planet, in this universe and the poem, like all man's works however large and bold and grand, are just written in the sand to be swept away by the winds and tides of time. I'll let you make your own further discoveries about this amazing poem.

So much more to say about her. We will do more Riding this year, I think.

"Poetry bears in itself the message that it is the destiny of human beings to speak the meaning of being, but it nurses it in itself as in a sacred apartness, not to be translated into the language of common meanings in its delivery. I was able to achieve in my poems a use of words that paid respect to the poetic motive of difference in word-use and respect at the same time to language as essentially one with itself, not divided into levels of meaning. But the constraints that the poetic techniques of difference impose on word-use limit the speaking-range and the meaning-effectuality of language to a miniature human and linguistic universalness. My kind of seriousness, in my looking to poetry for the rescue of human life from the indignities it was capable of visiting upon itself, led me to an eventual turning away from it as failing my kind of seriousness. "

And here's her home (shared with Jackson) and the Riding Foundation: www.lauraridingjackson.com/LRJ-Poetry.html
Posted by Unknown at 10:55 AM