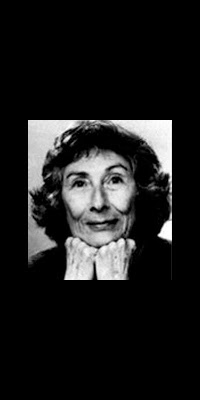 How to Eat a Poem

Don't be polite.
Bite in.
Pick it up with your fingers and lick the juice
that may run down your chin
It is ready and ripe now, whenever you are.

You do not need a knife or fork or spoon
or plate or napkin or tablecloth.

For there is no core
or stem
or rind
or pit
or seed
or skin
to throw away.

Hap Notes: I'm always kind of stunned about how many people are unaware of Eve Merriam (1916-1992). In addition to her charming verses, many written for children, she wrote some of the most caustic and remarkable social commentaries of our time and much of it is still very relevant.

For example, her musical "The Club" portrays men in a private club making disparaging and derogatory comments about women – and all the men were played by women. It was highly controversial at the time (1976) and it brought up riveting differences of how women were thought of and shocking contrasts between men and women. We'd do well to re-stage that today.

Then there's her seminal "Inner City Mother Goose" which dealt with poverty, housing issues and life in the hard edges of the city. Here's an example:

"Inner City Mother Goose" was published in 1969 and while many of the rhymes seem tame compared to the harshest of contemporary rappers, at the time the book was banned just about everywhere. Merriam reasoned that the original Mother Goose had social content so why not update it? The book had an introduction written by poet Nikki Giovanni. It's revelatory still.

Merriam wrote dozens of poems every bit as charming as today's poem in several wonderful books, too. I don't mean to say she was a hell-bent revolutionary. She was a quiet, educated one who bridled at social injustice. Her daughter said that Merriam sent Harvey Milk his first campaign contribution when he ran for Supervisor in San Francisco in 1973. Every time I read her work or about her I just want to give her a big hug.

Merriam had a life long love affair with poetry that started when she was 8 or 9 years old. She went to the University of Pennsylvania and Columbia. She held jobs in radio and was an editor for Glamor magazine. Her first book of poems, Family Circle, won the Yale Younger Poets Prize in 1946.

Throughout her life, though, her main interest was just getting kids to read poetry, read it aloud, write it, enjoy it. She felt this kind of literacy would make for a better world. How can you disagree with this?

Sorry this post is so late. Sorting through my books today I found Reflections on a Gift of Watermelon Pickle (Which Merriam's poem starts) It's pretty beat up, full of coffee cup rings, suntan lotion stains, odd pink fingerprints from some kind of candy... I gotta get a new copy- I've had this one (warped cover and curled pages- what the hell did I do, swim with it? No- I used it as a life raft.) for 40 years at least. I started drifting away in it and the next thing I knew the morning had flown away. I'd planned on a completely different poem. We've got time – we'll do it tomorrow.

By the way, don't take today's poem too lightly. Merriam is saying something rather deep about reading, letting yourself go without judgment, the sounds and feel of the words. You gotta take a bite, it might be messy. That's good. Poetry is not dry, it's full of juice.

Here's a good Merriam quote:
"I find it difficult to sit still when I hear poetry or read it out loud. I feel a tingling feeling all over, particularly in the tips of my fingers and in my toes, and it just seems to go right from my mouth all the way through my body. It's like a shot of adrenalin or oxygen when I hear rhymes and word play,"

and another:
"Whatever you do, find ways to read poetry. Eat it, drink it, enjoy it, and share it."

You can find more Merriam here: www.poemhunter.com/eve-merriam/
Posted by Unknown at 12:26 PM