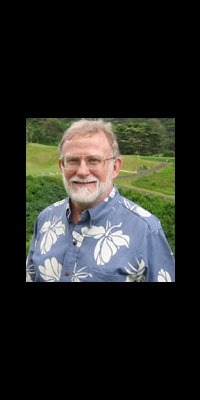 They are tall herbs, really, not trees,
though they can shoot up thirty feet
if all goes well for them. Cut in cross

section they look like gigantic onions,
multi-layered mysteries with ghostly hearts.
Their leaves are made to be broken by the wind,

if wind there be, but the crosswise tears
they are built to expect do them no harm.
Around the steady staff of the leafstalk

the broken fronds flap in the breeze
like brief forgotten flags, but these
tattered, green, photosynthetic machines

know how to grasp with their broken fingers
the gold coins of light that give open air
its shine. In hot, dry weather the fingers

fold down to touch on each side--
a kind of prayer to clasp what damp they can
against the too much light.

Hap Notes: Joseph Stanton (born 1949) is a poet, writer, historian and baseball fan who reverberates to art and uses words much like explanatory paint (i.e. the strokes explain, not obfuscate, the feelings and the subject – far more difficult than it sounds.)

He is attracted also to mythic and fairytale stories and art. In addition to at least three volumes of poetry, he has also written a scholarly text on the artwork of children's storybooks (and covers artists like Sendak and Van Allsburg among others) and how it appeals to both children and adults. He has also written a book on the career of power slugger and all-around mythic baseball hero Stan Musial. His blend of poetry and artwork has bred several poems inspired by the work of Edward Hopper.

In today's poem Stanton gives us a view of the banana we don't much consider – the plant itself. Since Stanton teaches art history and American studies at the University of Hawai‘i at Manoa, he probably sees a few banana trees (which are not really trees, you know. As Stanton points out, bananas are herbaceous). Hawai'i contains a large number of banana varieties. Bananas are extremely complicated plants which flower and develop the fruits.

Stanton describes the plant taking note of the extraordinary leaves which are not injured by the tears of the wind but just give the plant more area for photosynthesis. A bunch of bananas at the grocery store are often called a "hand" and Stanton alludes to the "fingers" of the leaves grabbing the sunlight and folding for water.

Banana leaves, in some cultures, provide shelter or cooking equipment (food is wrapped in the leaves before cooking) or even just serve as an umbrella against the rain. It's a remarkable plant, even inspiring a few poems, as we have seen.

The banana flower (pictured in the masthead) is awe-inspiring, isn't it? The huge flowers and leaves seem to be mythic in their beauty and size. It's amazing how much around us can take on the properties of epic myths with just a closer look, eh?