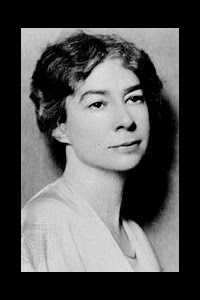 There Will Come Soft Rains

There will come soft rains and the smell of the ground,
And swallows circling with their shimmering sound;

And frogs in the pools singing at night,
And wild plum trees in tremulous white;

Robins will wear their feathery fire,
Whistling their whims on a low fence-wire;

And not one will know of the war, not one
Will care at last when it is done.

Not one would mind, neither bird nor tree,
If mankind perished utterly;

And Spring herself, when she woke at dawn
Would scarcely know that we were gone.

Hap Notes: The Byron yesterday reminded me of Bradbury's Martian Chronicles and that put me in mind of another poem used in the book; this one by Sara Teasdale (1884-1933). In Bradbury's story (titled after this poem) a fully automated house adjusts the temperature and the lights, makes the dinner, clears away the uneaten food and reads this poem aloud to the home's owners after dinner. Trouble is, the former occupants are gone. There's a depth of understanding in that story about the machinery we all use – it does not have the capacity to care about us, just for us if it is programmed properly. In fact, everything in the world goes on without us. One would think this would instill a sense of wanting to care for one another more whole-heartedly. One would think, anyway.

Teasdale was born in St. Louis. She was a sickly child, born late to her parents (her mom was 40 and her dad was 45 when she was born. Her closest sibling in age was 17 years older than she) and she was not even sent to school until she was older than ten years old. She was mostly surrounded by adults all through her childhood and she had, as you can well imagine, a vivid imaginary life, as most lonely children often do.

I suppose, in many ways, Teasdale is the epitome of the "poetess." She was frail and her poems are little wisps of longing and praises to beauty. One has to read all of her books to see her almost inevitable fate. Some of her poems are, as the Brits say, a bit "twee." Some are more like treacle. These overly-sweet poems (often, love poems, unsurprisingly) often take the sting out of her other verses. Like today's poem, which is a fairly biting commentary. So I'm gonna stand up for her a bit. (Breaking off briefly to say that she won the Pulitzer Prize, the Columbia University Poetry Prize and the Poetry Society of America Prize and was extremely popular in her day so much of her work's fragility has to do with the passage of time, here.)

Life in the early part of the twentieth century, especially in America, was marked by distances. Teasdale lived in the last bastion of civilization (St. Louis) until one got to San Francisco. Life was slow and most communication was done by mail. She wanted out of that. After Teasdale was published, she met the poet Vachel Lindsay who carried a torch for her throughout most of his life (and she for him.)

Teasdale did not marry Lindsay, she married a wealthy importer. She, as my grandma (from Teasdale's part of the country) used to say, "knew which side her bread was buttered on." Lindsay did not feel he could support the fragile Teasdale and he probably could not have. Her husband, Ernst Filsinger was a fan of her poetry when they met. I have no idea what kind of marriage they had – he was gone a lot on business, she was well-provided for, but she yearned. They lived in New York on the Upper West Side, she was well known, it would seem to be ideal. Teasdale, at that time, pretty well figured out that loneliness had nothing to do with where you were living.

Teasdale left Filsinger and filed for divorce in 1929. He didn't even know she was unhappy and was totally perplexed by this. She and Vachel Lindsay remained friends (she had other suitors but Lindsay was a special case) and he was married with a family and lived pretty close to her in New York.

Lindsay committed suicide by drinking a bottle of Lysol in 1931. Teasdale over-dosed on sleeping pills in 1933. There's a story in all this but it would take a couple of walls to tell it ("if these walls could talk.")

One of the key things to remember about Teasdale is how intensely lonely she was. She enjoyed her solitude, got her greatest ecstasies from it, but was often saddened by it. Her poem today shows us a little of her own lonliness.

Here's another glimpse of Teasdale:

When I am all alone
Envy me most,
Then my thoughts flutter round me
In a glimmering host;

Most of them merry,
Some of them grave,
Each of them lithe
As willows that wave;

When I am all alone
Envy me then,
For I have better friends
Than women and men.

All of Teasdale's books are available at no charge on Project Gutenberg (God bless them):
www.gutenberg.org/browse/authors/t#a223
Posted by Unknown at 4:28 AM