Number 74: Wallace Stevens "Thirteen Ways of Looking at a Blackbird" 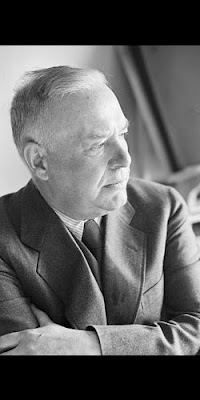 Thirteen Ways of Looking at a Blackbird

I
Among twenty snowy mountains,
The only moving thing
Was the eye of the blackbird.

II
I was of three minds,
Like a tree
In which there are three blackbirds.

III
The blackbird whirled in the autumn winds.
It was a small part of the pantomime.

VI
Icicles filled the long window
With barbaric glass.
The shadow of the blackbird
Crossed it, to and fro.
The mood
Traced in the shadow
An indecipherable cause.

VII
O thin men of Haddam,
Why do you imagine golden birds?
Do you not see how the blackbird
Walks around the feet
Of the women about you?

VIII
I know noble accents
And lucid, inescapable rhythms;
But I know, too,
That the blackbird is involved
In what I know.

IX
When the blackbird flew out of sight,
It marked the edge
Of one of many circles.

X
At the sight of blackbirds
Flying in a green light,
Even the bawds of euphony
Would cry out sharply.

XI
He rode over Connecticut
In a glass coach.
Once, a fear pierced him,
In that he mistook
The shadow of his equipage
For blackbirds.

XII
The river is moving.
The blackbird must be flying.

XIII
It was evening all afternoon.
It was snowing
And it was going to snow.
The blackbird sat
In the cedar-limbs.

Hap Notes: Well, Wallace Stevens (1879-1955) that most meticulous selector of words has one glaring error in this poem: what bird is he exactly talking about? A Rusty Blackbird? A Red-Winged Blackbird? Is he talking about a Crow or a Grackle or a Raven? Maybe even a Starling? You find this unimportant? Sorry. It's important to me. The "Common" Blackbird (like the one in the Beatles song) is European. Crows are from a completely different family as are Grackles. Obviously there's one more way of looking at a blackbird than Stevens realized- or maybe he did, dunno. It's sort of an added mystery to the poem for me.

Stevens said that this is a poem about sensory experiences or sensations and that, my friends, is the very best explication you will find on this poem. The more you read about it the more confusing it becomes. Some people have philosophical examples that relate to each section, some deal with the words, some go out on a limb much farther than a sensible blackbird would go to make an ornate ontological statement about "being." Here's what I say-- Stevens has allowed you to feel what you feel and experience the poem in your own way (so now there are 16 ways of looking at a black bird if we count yours (and everyone else's) and mine.)

Here are a few of my guides but I don't know that they will help you:

In IV I think he's talking about the idea of all creatures being one in the universe.

In V he may be talking about the bird's inflection and innuendos or that of the language we use.

In VI he's giving a description of what it looks like when you see the flight of the blackbird through a section of icicles- you'll see moving black spaces that almost look like a kind of bird semaphore or Morse code or maybe like a broken teletype machine (if you remember those.)

In VII he said that he liked the sound of the word "Haddam" which he knew to be a real whaling town that he thought sounded "Yankee." Men often search for profit while crows see the women...

In IX the many circles could be the eye, the horizon, the latitude etc.

In X the "bawds" of "euphony" or the brothel keepers of sweet sounds is maybe a bit of a tweak to British"lyric" poetry. Lyric poets were often engaged to write specific poems for special occasions. It may be a bit of a stab at the unnaturalness of this.

In XI the "glass coach" could mean a variety of things. Trains and buses have "coach" travel. So did Cinderella. If you would look out of the window as you were traveling in one of these coaches and see blackbird shadows around it, what would it look like? Probably a little scary. By the by, the coach that Princess Di and Charles used at their wedding was called the "Glass Coach" and it was made in 1911 for the Lord Mayor of London and was subsequently bought by the royal family. I don't think he means this coach but it's possible.... many interpretations are possible which is more or less one point of the poem. Could be another tweak to British poetry? Also, the shadow of a car sometimes looks as though it's made of glass.

Number XIII needs no explanation for those who live in snowy climes. I don't know how many times this part of the poem has gone through my head during a dark afternoon (which feels very much like evening) when the clouds were relentlessly, silently snowing.

Stevens gives us sort of an American version of Haiku poems in this very cubist look at a blackbird. The bird can stand for what you can make a consistent case for, really. I tend to look at the poem as more about the nature of creatures and observations. The observation changes the creature. What you define you may diminish or aggrandize. It's all about perspective. "Thirteen Ways" was published in 1917. Pretty modern stuff, still, isn't it?

Stevens' use of the language is quite extraordinary. He comes up with phrases that will echo in your head, float up to your consciousness unbidden and mysterious. I can never rid myself of the phrases in "Sea Surface Full of Clouds", the rosy chocolate, the gilt umbrellas, the Chinese chocolate, the "paradisal green," the "breakfast jelly yellow" etc. He turns the language into a modernist paintbox and gives us normal sentence structure (the canvas) and unusual images (the cubism or abstract expressionism) with odd and exotic sounding words (the paints.) For a poet who passed away in 1955 it's amazing how his poetry is still wrangled with by students and teachers alike. He said that "Life is not people and scene, but thought and feeling. The world is myself. Life is myself."He was always trying to describe this. I love his poetry but would never claim I understood it all.

Stevens went to Harvard, then went to law school. He worked as a lawyer for a while in New York and then took at job at Hartford Accident and Indemnity Company (insurance) in 1916 where he was eventually vice-president of the company. Later, he was offered a faculty position at Harvard but he would not give up his position at Hartford. I suppose there were many reasons for this but I can't imagine that even Harvard would give poet more money than an insurance company. He'd been comfortable in Connecticut for years, too. Plus, I imagine he had more free time to write at his desk there than he would have gotten at Harvard. Just imagining, here.

Stevens married a woman his dad thought was beneath him and consequently he never spoke or visited his parents while his father was still alive. Stevens wife eventually had some mental illness that manifested itself in paranoia. They had one child, a daughter they named Holly. So Stevens had no family to which to turn and no wife to be his friend. This sorrow leaks out of a lot of his poems.

His first book of poetry was published in 1921 so he wrote poetry while being an insurance executive. He was a very odd and inscrutable man. He took a few holidays in Key West, after falling in love with the place on a business trip. He managed to get into a drunken argument with Robert Frost one time when he was there, they sort of "wrestled" on the sandy beach. Stevens once had a fist-fight with Hemingway at Key West, too. Hemingway won. Stevens actually broke his hand when he punched Hemingway in the jaw. That Hemingway iron man stuff wasn't all talk.

Stevens won many prizes for his work including the Bollingen and the Pulitzer.

Robert Frost called Steven's poetry "bric-a-brac" (it's harsh but a little true don't you think?) Stevens was reputedly a hard man to work for at the insurance company. He was shy and liked a couple of stiff drinks once in a while- although never at work. He was a very conservative man on the outside, on the inside? Well, from what we can tell from the coded postcards of poetry ("from the volcano" maybe?) he left behind, he was sensitive, thoughtful and strangely exotic- like a new kind of hothouse flower with brilliant colors. With maybe poisonous leaves.

Here's a good Stevens quote (he wrote a great deal of brilliant prose on poetry): "A poem need not have a meaning and like most things in nature often does not have."

and another: "In poetry, you must love the words, the ideas and the images and rhythms with all your capacity to love anything at all."

again: "Most people read poetry listening for echoes because the echoes are familiar to them. They wade through it the way a boy wades through water, feeling with his toes for the bottom: The echoes are the bottom.'

one more: "Nothing could be more inappropriate to American literature than its English source since the Americans are not British in sensibility."