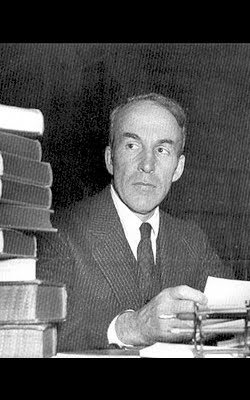 A poem should be palpable and mute
As a globed fruit

Dumb
As old medallions to the thumb

Leaving, as the moon releases
Twig by twig the night-entangled trees,

Leaving, as the moon behind the winter leaves,
Memory by memory the mind -

For love
The leaning grasses and two lights above the sea -

A poem should not mean
But be

Hap Notes: "Ars Poetica" means "the art or nature of poetry" and this well-anthologized poem by MacLeish (1892-1982) gives us pictures in place of didactic instructions. Both Aristotle and Homer wrote on "ars poetica" but MacLeish's is certainly the prettiest one.

This poem surely contains all the ins and outs of writing poetry. Some of the lines are perfect. Some, like "A poem should not mean/But be" will have more than a few readers rolling their eyes in disgust and thinking of statements like one made at an 'Obama-Care' forum to "keep your government hands off my medicare." Huh? Because Medicare is a government run program and this poem already is, isn't it? Or maybe it's more like logician Raymond Smullyan's book titles i.e. This Book Needs No Title and What Is The Title Of This Book? I'm picking nits, though, because of the poem's over-exposure in almost every decent poetry anthology. Even I roll my eyes at the line somewhat.

If you've never read the poem, I suppose I've just spoiled if for you. Not as bad as if I'd said "Rosebud is the sled" but still, I apologize if I have. The last line served as a "statement" for the modern aesthetic for way too many years and "statements" get jumped on. MacLeish's poetry and plays are full of ideas and not all of them are going to fly for everyone.

MacLeish was an exceptional intellect. He majored in English at Yale. He graduated number one in his class at Harvard Law. He hung out in Paris with all the famous ex-pats of the day, Stein and Hemingway and Fitzgerald et al. He won three Pulitzers.

What MacLeish did that stands head and shoulders above his writing, to me, anyway, was his refreshment of the Library of Congress to which he was appointed librarian during Roosevelt's presidency. He shot some life into it. He started the process to have an American Poet Laureate and he even once named Louise Bogan to the post when she was clearly hostile to his writing. He was a fair-minded guy with a penchant for books and the arts.

He reorganized the Library of Congress with such a good shake that he winnowed down the extraneous, reassigned the qualified and got it running properly. There is no amount of thanks that we can give that is too great for this. He blew the dust off the place and made it a repository for the mysteries of the human mind. He said, "If books are reports on the mysteries of the world and our existence in it, libraries remain reporting on the human mind, that particular mystery, still remains as countries lose their grandeur and universities are not certain what they are."

When he was appointed to the post, by the by, he was a controversial figure seeing as he had no experience or education in the library sciences. Roosevelt wanted a poet with some feeling for the arts. The American Library Association was a bit taken aback by this. Of course, it turns out that 34 of the 37 people who had taken the post before MacLeish had no library science training either. You know what they say when a new manager comes in; a new broom sweeps clean. Sometimes this is good, sometimes the good gets swept away with the bad and things get messed up. The library, it turns out, needed a good healthy sweep.

I find MacLeish's poetry somewhat hard to like. It is redolent with ideas which often trip up the lines. His mind is a finely tuned instrument, but one can see it clicking off categories in the work. It is obvious that he loved the form, though, and there beats a noble heart.

Here's a good MacLeish quote: "Once you permit those who are convinced of their own superior rightness to censor and silence and suppress those who hold contrary opinions, just at that moment the citadel has been surrendered."

And another in honor of the upcoming Super Bowl: "Conventional wisdom notwithstanding, there is no reason either in football or in poetry why the two should not meet in a man's life if he has the weight and cares about the words. "

You can find more MacLeish here: www.poetryfoundation.org/bio/archibald-macleish
Posted by Unknown at 8:52 AM