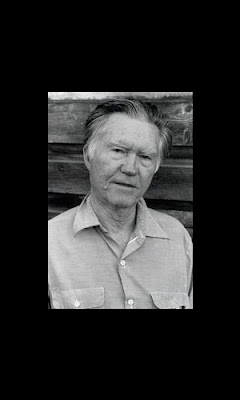 Just Thinking
Got up on a cool morning. Leaned out a window.
No cloud, no wind. Air that flowers held
for awhile. Some dove somewhere.

Been on probation most of my life. And
the rest of my life been condemned. So these moments
count for a lot--peace, you know.

Let the bucket of memory down into the well,
bring it up. Cool, cool minutes. No one
stirring, no plans. Just being there.

This is what the whole thing is about.

Hap Notes: William Stafford (1914-1993) was born in Kansas although he spent much of his adult life in Oregon teaching English at Lewis and Clark College. His first volume of poetry wasn't published until he was in his late 40s even though he'd been more or less writing one poem per day since the 1940s when he worked for the U.S. Forest Service as a Conscientious Objector during WWII.

His habit was to rise early (4 a.m.!) make a cup of instant coffee and a piece of toast and write until the sun came up. He wrote what he felt, what he remembered, what he saw. Stafford often came up with enchantment. His poems are organic to his thinking; they grow from his thoughts like trees or flowers. Unlike many contemporary and modern poets whose works seem willfully obscure, Stafford seems almost willfully simple.

In the poem, Stafford describes his habit of early morning writing. There's something magical about how Stafford's words (such ordinary words!) fill you with a sense of peacefulness and calm. "Some dove somewhere," like a passing thought as you listen to the morning. Don't take this casual air too lightly though. He didn't say "some crow" or "some jay" or "some cardinal" or "some hawk."

I don't want to ripple the surface of this poem much. Just let it sit with you a while. I do think that Stafford's Midwestern upbringing mixes with the Pacific Northwest in some sort of tribal alchemy, though.

William Stafford's work is something you should take in small doses. When the plain speaking starts to sound flat- stop reading it. The poems chronicle his days and a few days are magical. Put too many of them together and you start to take his simple style for granted.

You know how beautifully delicious vanilla ice cream is, all by itself, on a hot summer day? Maybe it's in a pretty cup. Maybe you're using a really great smooth silver spoon. It slips into your mouth with cool sweet wonder. You can taste that exotic vanilla bean from far-off Madagascar. You can taste the sweet complex frozen cream. Well, if you keep eating it and eating it, it gets less and less satisfying. Where's the chocolate sauce? Where's the cherry? Why aren't there any salted nuts on this? This could really use some M&M's. Reading Stafford's poetry is like that. Don't over-fill yourself or you'll lose the magical sensitive appreciation of it.

He's written a skillion (read: 67) books of poetry and prose. Don't read them all at once. It is unsurprising to know that he was a close friend and collaborator with Robert Bly. His son, Kim Stafford, is a talented poet and essayist also.

Here's a good Stafford quote: "If I am to keep writing, I cannot bother to insist on high standards.... I am following a process that leads so wildly and originally into new territory that no judgment can at the moment be made about values, significance, and so on.... I am headlong to discover."

And another: "Kids: they dance before they learn there isn't anything that isn't music. "

You can find more Stafford here: www.poetryfoundation.org/bio/william-e-stafford
Posted by Unknown at 3:27 AM