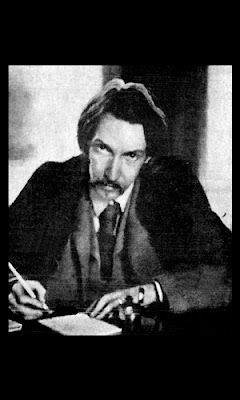 After Reading Antony and Cleopatra

As when the hunt by holt and field
Drives on with horn and strife,
Hunger of hopeless things pursues
Our spirits throughout life.

The sea's roar fills us aching full
Of objectless desire -
The sea's roar, and the white moon-shine,
And the reddening of the fire.

Who talks to me of reason now?
It would be more delight
To have died in Cleopatra's arms
Than be alive to-night.

Here we have another guy who wrote a good deal of "children's poetry." Remember A Child's Garden of Verses? Of course he also penned some mighty famous tales, for example; Treasure Island, Kidnapped, and The Strange Case of Dr Jekyll and Mr Hyde. He is said to be in the top 30 of the most translated authors in the world. He was something of a celebrity due to the popularity of his books.

Stevenson packed a good deal into his short, riddled-with-illness, 44 years. He was born to a family of lighthouse builders and I believe his dad thought he would follow in the family biz. Parents of teens may note, with a bit of bemusement, the rules of a club (the Liberty, Justice, Reverence Club) he and a school friend devised, the first of which was "Disregard everything our parents have taught us." He was a great lover of reading as a youth and particularly admired Shakespeare, Walter Scott, and John Bunyan. His father made him at least get a law degree at the University of Edinburg which he did but he never actually practiced with it.

He traveled widely, fell ill a LOT and when he felt better he wrote like a house afire. He was a right handsome fella for being so terribly skinny most of his life. His life is worth several books worth of stuff so let me just tell you he ended up in the South Seas on a Samoan Island where the natives adored him- he was called Tusitala (story teller) and was often involved in politics involving the isles. He married a woman 10 years his senior who already had children.

He has often been relegated to "children's" literature or worse, Neo-Romantic sentimentality, however his admirers include Jorge Luis Borges, Ernest Hemingway, Rudyard Kipling, Vladimir Nabokov, G,K. Chesterton, J. M. Barrie and French Symbolist Marcel Schwob. Henry James was his dear friend and champion; Stevenson wrote a charming poem about an antique mirror and Henry James, perhaps we'll read it together at some point.

This little poem packs a wallop. Stevenson is telling us that the human race is always hungering and aching for unobtainable, often indefinable things. These mysterious things haunt us throughout our lives. The sea speaks of it to us, the moon fills us with it and watching the firelight and the reddening coals speaks of it. This aching, unrealized desire is past reason. Stevenson imagines himself, after he has read Shakespeare's play, as an Anthony, dying in the arms of Cleopatra- something that can never happen but fills him with a romantic longing.

I believe much of our lives we are yearning for a similar satisfaction; one that can never happen. Like Stevenson's impossible fantasy, its elusiveness makes it all the more appealing and frustrating. Humans do not like to think there is anything that is impossible- this impossibility may be the sadness that mixes with the search.

That ocean image is particularly apt- you know how, standing on the seashore, one is filled with an ache and a longing in addition to admiration and maybe, a bit of fear? What is it we want when we look out upon ocean? Who can specifically name it?

Oh, a "holt" is a wooded area. And remember he's not saying a hunt is full of hopeless desire, he's saying our desires for these hopeless things trail us like a driven hunt. It may be, too, that our desire for the impossible is part of the thrill of the hunt, that it, in itself, is part of the romance of life.

Stevenson probably has the most quoted gravestone of all time; his poem "Requiem."

Under the wide and starry sky,
Dig the grave and let me lie.
Glad did I live and gladly die,
And I laid me down with a will.

This be the verse you grave for me:
Here he lies where he longed to be;
Home is the sailor, home from sea,
And the hunter home from the hill.

Here's a good Stevenson quote: "If your morals make you dreary, depend on it, they are wrong."